TED biologists began studying bats in Southeast Alaska in 2010 in response to the spread of a deadly fungal disease called White-nose Syndrome (WNS). Because WNS attacks bats while they are hibernating, the primary objective of the study was to figure out where Southeast Alaska's bats spend the winter. Bats east of the Rocky Mountains hibernate primarily in caves and mines, congregating in large groups of up tens of thousands of bats, making it easy for the fungus to spread rapidly. More than 6 million bats have died from WNS, prompting the US Fish and Wildlife Service to consider the little brown bat, the most common species in Alaska, for listing under the Endangered Species Act (ESA). However, a radiotelemetry study revealed that little brown bats in the Juneau area are hibernating locally, either between jumbles of rocks on steep mountain slopes, or under the rootballs of trees or stumps. Because bats are hibernating locally, in small groups of only around a dozen bats, it is hoped that WNS will not spread as quickly as it did in eastern North America.

Furthermore, temperature loggers revealed local bats are hibernating at colder temperatures, which should slow the growth of the fungus, hopefully making it less deadly. Currently we are using a trained scent dog to locate more hibernation sites to help us better understand the overwintering behavior of our local bats and the implications for WNS. Hopefully, this different hibernation behavior will help protect Alaska's bats from WNS and avoid the need for a listing under the ESA. 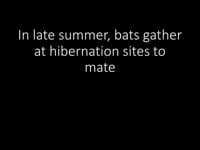