Aleutian terns nest along the coastline from southeast to western Alaska and migrate to overwintering sites in Asia. Declines in the numbers of birds returning to colony sites across the state has prompted scientists to launch a large monitoring and research effort aimed at understanding what is causing the decline at known colony sites. Aleutian tern nesting colonies are easily disturbed by wild and domestic predators, as well as humans, and abandonment of colonies are common resulting in poor nesting success.

The TED program and its partners have been monitoring tern nests to determine chick survival, causes of nest failures (such as predation or disturbance), and to identify prey items being provided to chicks on the Kodiak archipelago. Trail cameras are placed at nests to photograph disturbances and feeding. During the 2019 field season, a total of 53 Aleutian tern nests were monitored. Eighteen camera nests survived to the hatching stage. A total of 46 Aleutian tern fledglings were documented overall, which was the highest breeding success observed on the Kodiak road system in many years! Diet information is being compiled from the photos and will be compared to information on diet in years past. 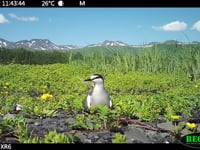